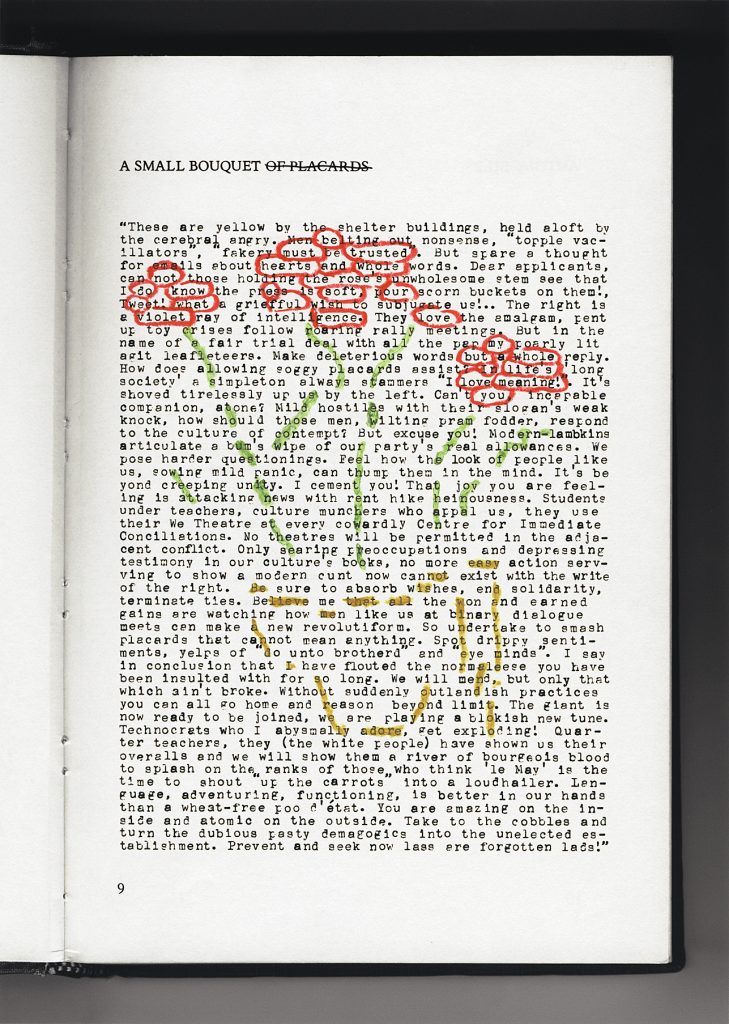 In her solo exhibition at uqbar artist Natalie Czech (*1976, lives and works at Berlin) presented photographs from the series A Small Bouquet by Frank O’Hara, newly produced for a parallel show at Kunstverein Langenhagen.

The series relates to the body of work titled Hidden Poems, that the artist has been working on since early 2010 when she was granted the Alfried Krupp von Bohlen und Halbach award for contemporary photography. Hidden Poems consists of photographic images of open pages of magazines, daily newspapers and picture books with certain words highlighted in color. Natalie Czech searched out for texts, which allowed her to locate and to highlight poems of writers such as Robert Creeley or E.E. Cummings within the body of continuous text. Thus creating a complex system of references between the different text and image material.

For A Small Bouquet by Frank O’Hara Natalie Czech inverts this process. This time, she did not locate poems in pre-existing texts but asked seven authors from various backgrounds to create stories around a poem itself. Andrew Berardini, Julien Bismuth, Maia Gianakos, Leslie-Ann Murray, Mick Peter, Nathania Rubin, and Alix Rule wrote texts incorporating the calligram A Small Bouquet by US-American poet Frank O’Hara (1926-66) from the 1950s. At a distance, one has the impression of being confronted with identical photographs of pages from a 1950s book, with a strange arrangement of flowers drawn on top. Upon closer inspection, there are seven stories inviting very different paths. What stays in common is the calligram’s visual structure, which functions as a backbone highlighted by the artist by hand with color oil pastel on each print.

Again, the artist creates a complex system of references between text and image material. The labyrinthian works to not only ask the viewer to actively contribute to the creation of the work but also to challenge the very idea of authorship and originality.